From a Parker Guitars press release:

NEW YORK, NY—June 5, 2003—Aerosmith bass guitarist, Tom Hamilton, kicked off the 2003 Save the Music Auction with a donation of one of his most collectible guitars, a prototype of the Parker Fly Bass. The donation was announced on-air during an interview yesterday on CBS’s Early Show. Hamilton played the prototype Parker Fly Bass throughout Aerosmith’s most recent tour. The bass is signed by all of the members of Aerosmith, as well as Parker co-founders, Ken Parker and Larry Fishman. Parker Guitars presented Hamilton with the first production model of the new Parker Fly Bass, serial #0001, in April. The bass will be auctioned in Save the Music’s Celebrity Instrument Auction on eBay, with all proceeds going to the VH-1 Save the Music Foundation. 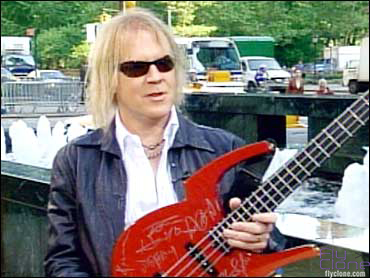 “I came from a school that couldn't afford a good music program,” said Hamilton. “So when I hear about kids in schools that have really good music programs, I feel this envy and excitement, because there are a lot of kids with musical talent that may never otherwise come out in the forefront unless they have a chance to really explore it.”

Hamilton explained that he first became interested in Parker Guitars because of the company’s proximity to his hometown. “They're right outside of Boston,” Hamilton recounted, “and I approached them.” As it turned out, Parker was nearing completion of the company’s first-ever bass guitar, and offered one of its two prototypes to Hamilton to try out. “I used this every night for about half the show during the last six months of our tour.”

The signatures of all the members of Aerosmith as well as the guitar makers themselves, make this Parker Fly Bass a surefire winner for the Save the Music Auction. The auction will be held on eBay beginning Monday, June 9th. A starting price has not yet been set, though Hamilton noted the bass is “very rare. There were only two ever made and only one that's signed by everybody in the band.” 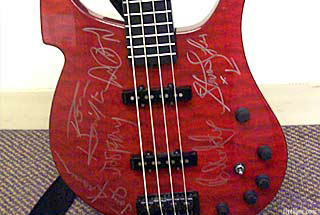 
The VH1 Save The Music Foundation is a non-profit organization dedicated to improving the quality of education in America's public schools by restoring music programs in cities across the country, and by raising public awareness about the importance of music participation for our nation's youth.

Cool
So I wonder, where is it now?
Top

That is a great question, @Mr303! I wish I knew! If I owned it, I probably would have played it and then hated myself for accidentally wiping off all of the signatures