RMCasey wrote: ↑Thu Jan 28, 2021 12:43 am You loose the master volume. To me that's not a big deal and can be adjusted at the amp. Do you just put a dummy knob/pot where the old one was so you don't have a hole? Anyone try a killswitch here utilizing the hole in the guitar for something?

I agree; not the end of the world, but it is nice to be able to control the master level of the relative magnetic and piezo balance.

Some folks don’t like a pot where the master level pot is located, so they unscrew the washer, push the pot into their Fly, and plug the hole.

I’ve plugged the switch and “red button” stereo switch holes with these kinds of plugs. All pots have a 3/8” hole; all switches have a 7/16” hole, the red piezo switch cavity is a 1/2” hole.

I’ve also installed a killswitch in one of mine in the tone pot position; why not?!

Those are the major differences; the refined controls also have a coil-tap option for the magnetic pickups, though I can’t recall if that’s available for all refined Fly models or just the Fly Mojo.

The Powerchip usually comes with the smart jack, and you would not need the red stereo button. You can remove it and plug up the hole, or, as others have shown: makes a great location for a MIDI output port.
Top

No real desire for midi so that's not a factor for me. I use it for effects switching but that's about it. Maybe I don't know what I'm missing but sometimes that's best

Also... you loose the master volume of Graphtech too right? You just get to keep piezo tone and add midi if you want.
Top

@RMCasey, I recently made a post addressing master volume functionality:


mmmguitar wrote: ↑Thu Jan 07, 2021 10:18 pm You can use a 250k dual-gang/stacked pot as a master volume in all refined Flys (Powerchip and Acoustiphonic) - The point-to-point wiring gives you as much flexibility as with any other guitar. [...] The only downside one may encounter is the sweep of the pot not turning down the piezo-fed signal at the same rate as the mag one (Graphtech, as a tenuous example, uses 250k pots with a particular taper for their “MIDI volume” control).

The point of the “refined” control scheme was (ostensibly) to use common components and fewer of them, for overhead and serviceability cost-cutting. Nonetheless, one is free to implement a control scheme similar to the pre-refined Fly if one wishes. The only issue that seems apparent while my espresso is kicking in is if routing the pre-powerchip mag signal and post-powerchip piezo signal to two switches sharing the same housing would somehow interact in an unintended/improperly isolated way.

Poster/mad scientist MadMac has replaced his pre-refined stereo switches with a master on/off switch. Though not my cup of tea, he certainly made use of that hole.
Top

I kept the Master volume in its original position and plugged up the mag pickup volume on one of my Flys: 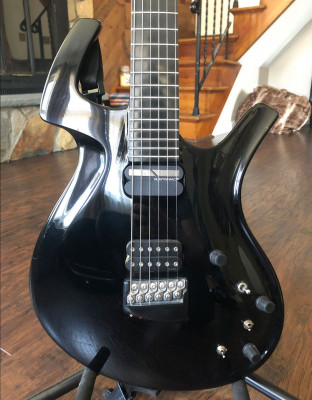 From top to bottom in the photo, the controls are:

No piezo on this particular Fly. FWIW--I like the Master volume position where it is so I can do "volume swells" without having to move my right hand out of playing position. Others, I've heard, find themselves bumping into the Master volume knob too frequently while playing.
Top

Part of me feels like I'm going rogue... making a Fly parts-caster. Not that anything is wrong with that. Some of my best guitars are parts-casters... and end up being EXACTLY what I envision and what I want. However... I guess there is no choice anyway... the original parts aren't available so some change is necessary and for the best!!!
Top

We’re just taking about electronics though, correct? If so, you can try to carefully remove the flex PCB and all connected components intact; that’s what I did the with Fly above. You’d need new switches and pots plus the Fishman Powerchip and output jack—that’s it! Save the old electronics in case you feel nostalgic or decide to sell this Fly.

Personally, I am very reluctant to do anything irreversible to any guitars, though I’ve made some exceptions through the years. It seems like you’re just customizing the electronics to fit your needs, which is great!
Top

agreed. I'm exited to get it back working again!
Top

I know my questions seem redundant... I just don't want to order the wrong stuff.

If I want to stay as close to original as possible... and I'm going with the Fishman power-chip... do I want to go active or passive. To be frank... I'm not sure what the difference is... I believe the original was active right? Is there an advantage to passive?

Should I replace the existing pots? What have you found best to work with this type of retrofit.

The guy at Fishman told me I could attach a Piezo tone control to the chip... have any of you done that? Thoughts?
Top

@RMCasey, as you’re well-aware, your ‘98 Fly can’t be restored to “stock” unless you can source the original parts or wait for them to be fabricated by crazy people such as VJ.

This frees you to utilize Fishman, Graphtech, or RMC electronics in any capacity you wish. If your thinking is that going with the ‘03-‘11 era Fishman wiring is the simplest way to go, you’re correct (as you’d just be replacing the piezo board and *potentially* the pots and switches) - But none of the currently available options will necessarily restore the Fly’s original functionality (concentric piezo volume/tone, mono-stereo push button, etc.) without modification by a tech familiar with Flys.

If your local tech is up to the job of utilizing as many of the original parts as possible, you could do away with the ribbon assembly and just wire all the pots and switches point-to-point to the PowerChip. Whether they’re going to be comfortable incorporating the original dual-gang or concentric pots for master volume and piezo volume/tone into the new circuit (rather than replacing them with different pots that may not achieve the same functionality) is a matter all its own.

Personally, I’d remove the entire assembly of original electronics in one piece to retain or sell to other Fly owners, then rewire the Fly with Graphtech components for no reason than they’re modular. But there really is no right or wrong way of going about this.

Concerning active/passive Powerchip switching: “Passive” refers to wiring things so that the magnetic pickups’ signal isn’t routed through the PowerChip unless you set the mag/mix/piezo switch to “mix.” The “benefits” of this are that the magnetic signal isn’t buffered (which some prefer), and that the mag signal isn’t affected by the 9v battery dying. The stock “refined Fly” wiring is “active” in that it routes everything through the PowerChip - No battery means no sound out of the guitar. Again, this is all a matter of preference - If you have none, then you may as well have the Tech wire everything up according to the original diagrams.

Wiring a tone pot to the PowerChip should function identically to the original piezo tone knob.
Top

Thanks so much @mmmguitar. Such a useful post. I hope it never happens, but good to know we have options.
Top

The quirk of Fly circuitry is that its’s just regular old 1950s guitar circuitry, but with some components having been complicated one extra step (e.g. Most humbuckers can be modified for Fly-mounting, some common jacks can be modified to replace the 90s Fly jack, several companies make piezo/mag preamps that Fly elements from any era can be hooked up to, etc.). So the good news is that Fly owners will always have options to keep their guitars functional. It’s only those wishing to keep a particular production-era Fly vintage-correct who are forced to scour or wait on an enterprising soul to reproduce the parts.

While VJ’s putting some of his many talents toward reverse-engineering some much-needed parts, Fly enthusiasts such as myself and MadMac are preoccupied with what Flys still being produced in the current year would have under the hood as standardized parts.

I feel the Antares autotune technology could have really been something big - Alas, it no longer exists as available kit. But just imagine a Fly with
-3 voice Fishman Fluence pickups as standard,
-a sustainer driver built into the neck under the last few frets,
-a multi pin-out to a breakout box for stereo 1/4”, XLR, Roland 13 Pin, or 5 pin MIDI,
-perfect intonation at the flick of a toggle, and
-bluetooth MIDI controller trem bar with receiver that plugs into any MIDI-controllable stompbox or multi-FX.

One can daydream...
Top

Thanks for the input guys!

Can someone please confirm which one worked for you on a 98 Fly Deluxe?
Top

Yes, I believe that was my mistake posting in haste; I googled the part just to reference, what it looks like and didn't know that there were actually two different versions with different shaft sizes. Mia culpa!!

I have several old Powerchips here and these do all appear to be the standard-sized shaft, which appears to be the main difference between the PCH-001 and PCH-002; they don't seem to list the actual size of the shaft, but I think the Fishman rep is correct: you want the Fishman PRO-PCH-001, which they seem to call the "standard shaft" as opposed to the "long shaft". Fishman is great with returns, so if what you need is not the 001, then they will likely take it back without an issue. Would you please keep us in the loop, so I can update the parts list with the correct info?
Top

Will do. It's on order. As soon as I can confirm everything works I'll send a list pf the parts I used.
Top

So I got the parts in and delivered them to the Luthier who I am working with along with the Point to Point Diagram.

Have any of you come across this with the Fishman PowerChip? Any workarounds?
Top

Hey @RMCasey, Just to clarify: by square jack, you’re saying that Fishman Powerchip didn’t come with this kind of jack: 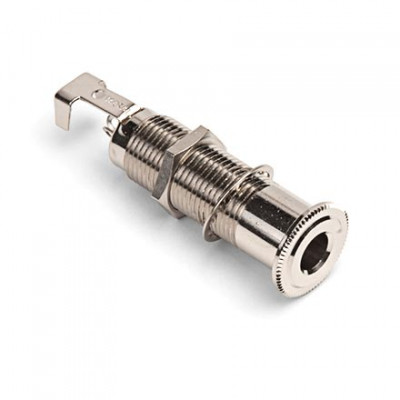 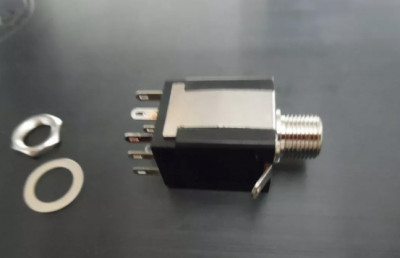 Okay--makes sense to me now; I believe that for a time Fishman would sell the Powerchip with one of these types of Switchcraft "barrel-style" output jacks:

from Stew Mac | direct from Switchcraft

They are more like the original output jack on your Fly, but didn't actually exist in a TRS format at the time that Ken Parker and Larry Fishman were working on this. I believe that simply using of these in the TRS variant (152B model) should be able to interface properly with the Powerchip and do the "smart-sensing/smart-switching"...I'd welcome others to confirm if what I'm saying is correct, but I believe it is. Actually, Fishman customer support may be able to answer that question for you too.