The following information was taken (and now adapted for accuracy by the Fly Clone community) from the official Parker Guitars website. See also this post about Parker Guitars history.

PRIOR TO 2003: Flys will have the six digit code. The first three digits are the day of the year, the next two are the number in that days production, and the last digit is the year.

2003 - 2006: Both 6 & 7 digit numbers were reportedly used. The first three digits are the day of the year, the next two are the number in that days production, and the last digit (or two digits) designate the year. Any doubts regarding the year of manufacture during this period can be cured by a quick examination of the control layout. It is regarded as a "Refined Fly" if it is 2003 or later.

The following abbreviations for wood used on the guitar in question (included at the end of serial numbers before 2006, placed elsewhere on the headstock after 2006) should help w/ identification of the model. Neck wood is always listed first. 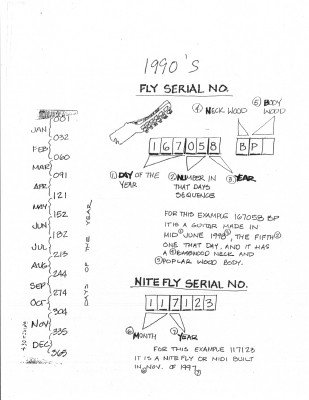 The first Parker Fly basses (they used the same scheme as the Nitefly guitars) produced in Wilmington at the original Parker facility headed by Ken himself, used a 7-digit serial number, of the scheme MMYYSSS, where MM = month, YY = year and SSS = production number that month.

The Fly basses produced between the introduction in Oct 2002 and July 2003 apparently have the 7-digit serial number scheme. 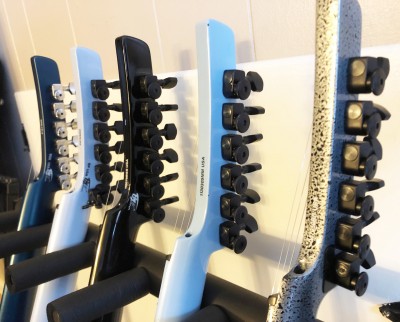 As shown, the wood letter codes and "USA" appeared on the back of the headstock around 2006, and, prior to that, after the serial number. 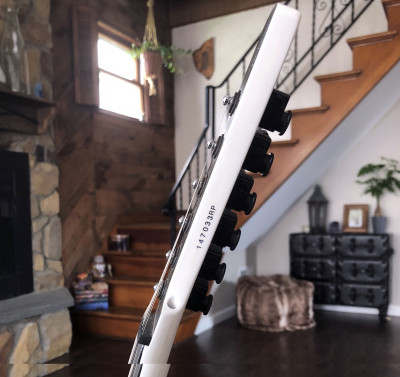 Referring to the Fly Bass History document, the first Parker Fly basses (they used the same scheme as the Nitefly guitars) produced in Wilmington at the original Parker facility headed by Ken himself, used a 7-digit serial number, of the scheme MMYYSSS, where MM = month, YY = year and SSS = production number that month.
The 6-digit serial number scheme was apparently adopted after the production was moved by USM to Vernon Hill in July 2003.
The Fly basses produced between the introduction in Oct 2002 and July 2003 apparently have the 7-digit serial number scheme. Mine is from March 2003.

Hence, I also would assume that Nitefly guitars produced between Jan 2000 and July 2003 have the same serial number scheme?
Top

Thanks @MrWalker, I’ve updated the main post above with this info; you’re correct, obviously, (I even checked with my FB-4!), so thanks for catching that.

Good question about the NiteFly serials—I have a ‘97, which has the serial as described, and I’d imagine that that NiteFlys from 2000+ had a two-digit year and this a seven-digit serial (like the FB-4).

Can anyone with a 2000+ NiteFly confirm a seven-digit serial?
Top

Thank you for the above information everyone! Unfortunately, my Parker NiteFly seems to throw a monkey wrench in the serial number decoding process you’ve outlined above and I don’t have a viable suggestion myself.

I bought what was sold to me as a 2002 Parker NiteFly Swamp Ash in Transparent Red off of Reverb from a person who had bought it used from whom they claimed was the original owner/purchaser whom they knew personally and not just through the sale of the guitar. This would make me the third owner based on the information provided to me by the seller.

According to this Parker NiteFly history document the model I have was actually from the “pre-refined” era of NiteFlys manufactured between 12/1999 and 07/2001.

Mine has a flat white/black/white sandwiched pickguard and a “stereo/mono” push button toggle switch to alternately separate and sum the magnetic and piezo pickups. The newer versions that would have gone into production in July 2001 had a pearloid white pickguard instead and the Fishman Power Chip circuit with “Smart Switching” on the output jack which deprecated the need for the manual push button “stereo/mono” switch that mine has. (See attached photos.)

This leads me to believe that although this guitar may have been purchased new in 2002 as explained to me from the claimed second owner, it seems pretty clear it is actually from the manufacturing window of December 1999 to July 2001 based on the above outlined details and nuances.

The serial is 68210 USA which doesn’t seem to fit any of the conventions outlined above since it is only 5 digits long. Hopefully this information will help guide us to ultimately deciphering these serials though. Thanks for the post and for reading. 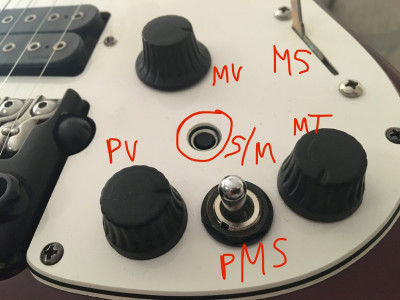 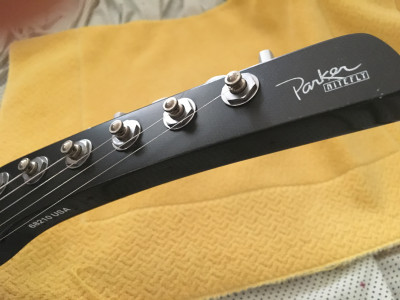 Yes, using the info above (originally provided by the Parker Guitars website), your NiteFly serial 68210 would denote:
July 1998 210th guitar that month

It's not unheard of for an instrument made in one year to be sold later (even much later) with the newer updated electronics, but the updated electronics were introduced in the NiteFly line in 1998. However, page 2 of the Parker Guitars NiteFly History document you noted shows: 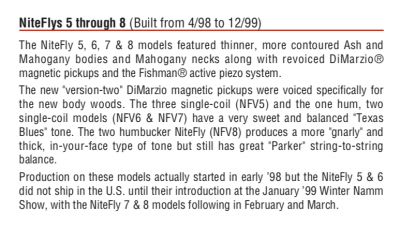 So, it seems like you have an NFV6 or NFV7. Is that not how you're interpreting it?
Top

I think the Serial Number format stated for post 2006 Fly models is incorrect. Based upon my own Fly Mojo, S/N: P0808452, I would submit that the number format is YYMMNNN where YY = Year, MM = Month and NNN = Production Number for that month

Hi @ThePedroDB, this is what’s shown under the Fly section:

Seems to be the same as what you’re suggesting, right?

FYI - we’re trying to reconcile the narrative that was originally posted on the official Parker Guitars website with what is actually accurate. However, I will add a note to the NiteFly section to reflect the “P” years.
Top

VJ,
the statement you quoted is not the same as I suggested.

Your statement suggests the format YYMMDDN, which includes DD = Day of the Month and N = Production Number for that Day.

If that were true my guitar would have been produced on the 45th of August...

Haha I missed that!!!
Top

I'm trying to track down all pertinent info on this PM-series Parker I picked up. Can anyone help me?
S/N 09090126. Quilt top with Parker-branded pups. I tried a post a pic but couldn't figure out how. Photo tab doesn't appear to function.
Top

Did this help, @sawatchboy?
Top

So, the suggestion would be that 452 is a production number? It might be more likely that 452 is some sort of internal code as I can confirm that—unless “production number” refers to all guitars they produced—Parker Guitars never came close to producing 452 Fly guitars in a month, especially in the USM years. That number was about 170, but usually much lower.

Hi VJ,
would the number work for all USA Produced Models (of all varieties) in a single month?
Top

That’s a good question; let me ping a few people and see if we can get an answer on that.
Top

Hi, I have a Fly Classic that I'm trying to put a date on; would much appreciate any help. I'm fairly certain it's pre-2003, because it has the gen1 DiMarzio pickups (based on the block lettering I reviewed in some pics showing the different gens). And the case candy with the guitar has a Parker Guitars Handbook with a copyright date of 1995. However, the serial number, which is along the bottom of the headstock, reads "3430678BMH USA", which doesn't really jibe with the statement that all pre-2003 Flys had a 6-digit code. Any ideas?
Top

Hi @shawn42—interesting! Just to make sure we’re talking about a pre-refined (for lack of a photo), does the Fly have the wheel going through the body? If so, then it’s definitely a Fly from the first decade—though things were getting murky around 2003/2004.

Every now and again an interesting case like yours pops up—usually the last digit is always the year with pre-refined Flys.
Top

Yes indeed, the tension wheel goes all the way through the body. So given that, and the serial number with last digit of 8, would you guess mine to be a 1998?
Top

I would interpret it as the 067th guitar made almost at the end of the year in 1998.
Top

So, that would give it a Wednesday, December 9, 1998 birthdate. And I guess the implication of that would be that back in those days, or at least on that date, they were making 100 or more guitars a day. Thanks vjmanzo, appreciate your help with the detective work!
Top

Not a problem, Shawn; yes, that’s about right regarding production. I have some production logs from the USM days that show roughly 100-ish guitars each month. I’ll check the serials on my Flys to see if I spot any zeros in that middle section—it could have been that the person who applies the serials just put that in and that’s that. Still, I’m glad we have a note of that now, so thanks for contributing to and being a part of this little slice of Fly heaven