Tonewoods
Below is a comparison of tonewoods used on Parker guitars that originally appeared on the Parker Guitars website. 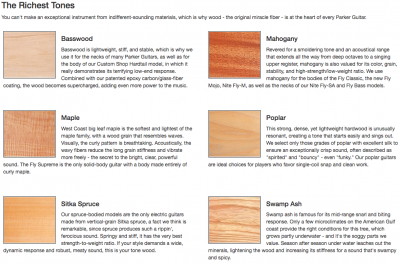 Official Fly Models
The various models of Flys denote the distinct wood combinations used. Below are the names that appear in the official in catalogs. Most commonly:

More details on each model can be found in the catalogs from 2004 prior.

* Note: while all aforementioned Flys (except the Fly Mojo) were once available with either hardtail or vibrato bridges, the model with a basswood neck and basswood body is named the Fly Hardtail.

Please also note these model names are commonly attributed incorrectly on used Flys listed for sale (Reverb, eBay, Guitar Center, Craigslist, etc.). A photo of the serial letters or a close look at the woodgrain and finish options on the body are your best clues in verifying s what you’re looking at (this is actually easier than it sounds, actually!).

Fly Model Names
Unlike, for example, Fender Stratocaster models, which span from inexpensive "budget models" like the Squier to more expensive high-end models, the Fly has no tiers of "build quality". There is no "Fly Basic" to which a "Fly Deluxe" is superior; a "Fly Supreme" is not "Supreme in comparison to all other Flys"; the "Fly Mojo" doesn't, in any measurable sense, have any more "Mojo" than a "Fly Classic".

Each model has a unique name and, while they all have their own special timbral qualities, they were all made similarly to very tight tolerances and primarily differ only in wood type and, potentially, with the electronics. Subjectively, they are certainly all in the same family with regard to "feel", balance, tuning stability, and many other qualities that make Flys so great!

The main differences in list price between the Fly models had more to do with the particular tonewoods that were used; as a comparison, basswood tends to be a less-expensive wood than highly-figured maple, so the "Fly Hardtail" model (basswood body) had a lower list price than the "Fly Supreme" model (highly-figured maple body).

Fly Model Variants (Fly Butternut, Fly Koa, Fly Tulipwood, etc.)
There are several other tonewoods variants that have existed through the years as custom shop or special orders including Flys with bodies made of koa, butternut, walnut, and cedar. Ken regularly experimented at Parker Guitars, and sometimes he would get limited quantities of certain woods resulting in short runs of 50 or so Flys like the so-called "Fly Butternut" model. The butternut wood, for instance, was supplied to Ken from a one-off supplier; in Ken's words, "We would have made more of these instruments, but we only had a limited supply of material...they sound like 'mahogany-plus!'". Such one-off models never received differentiated monikers (like Deluxe, Classic, Mojo, etc.) that were officially noted in any catalog and they were, most commonly, guitars sold at trade shows like NAMM.

The USM custom shop made it possible for customers to order Flys in various unusual tonewood combinations, whic resulted in more "unofficial" models. For example, there was an unofficial model that has been colloquially referred (on the old USM forum era) as the “Fly Virtuoso”: spruce neck + spruce body. Again: that name never officially appeared in any catalog. The so-named Norse Flys, as another example, were a custom shop order of hardtail versions of the Mojo and Artist (in both spruce and cedar) with hardtail bridges, no piezo components, and custom engravings.

The "Fly Tulipwood", as another example, was a variant of the Fly Deluxe and quite literally exactly the same as a Fly Deluxe with the notable exception that the poplar body wood was figured (less common for poplar). While building Fly Deluxes, Ken and his team simply put all of the “attractive looking“ pieces of poplar wood in a pile, and, eventually, then made a line of Fly Deluxes from these unique pieces of poplar. Accordingly, these Deluxes were painted with a transparent green finish as opposed to the usual Fly Deluxe treatment of painting the bodies with an opaque finish.

Ken originally intended to call the Nylon string version of the Fly the “Fly Classic”. It appears in the catalogs as the “Fly Nylon” and was later called the “Spanish Fly”. The “Fly Concert” also became known as the “Fly Bronze”.
Top

As obvious as it is that I should just ask Ken directly, I’m curious to know others’ thoughts: Why do you suppose swamp ash was good enough for the Nitefly line, but never an option with Flys? I’ve owned several guitars (mainstream and niche) with SA bodies, and find it odd that it was never implemented in the Fly line in a production capacity, even under USM or Jam.
Top

That’s a good question, @mmmguitar! I do know that @Ken Parker loves to experiment and did many one-off Flys of varying materials and wood combinations during his tenure at Parker Guitars!

I’ve tagged him in this message, but we’re supposed to chat anyway soon, so I’ll ask him!
Top

:: added a brief video to the original post in which Ken Parker tells two stories about trying to convince people that Parker Fly guitars are made out of wood ::
Top
Post Reply
4 posts • Page 1 of 1