A general musical discussion that doesn't fall under other categories.
Post Reply
2 posts • Page 1 of 1

I'm new here (Greetings!); just bringing my sugar to barter with you for salt (knowledge is everything; connections get you there).

This is a PPG-Paints internal system screenshot that shows some of the most common Parker Guitars paint codes. I confirmed with a PPG representative that they still have these colors available, although they have moved them to their Deltron 2000 DBC basecoat brand (rather than "Fleet"). Notice that there are some iconic colors that are missing, like the Galaxy Gray. Anyone knows how to find the original paints of those models that are not included on this PPG list? (Shazrock's Sharon may know the answer, but she's busy enough to ignore this type of inquiry; trust me).
Coincidentally (and maybe unrelated), the House of Kolor (HOK) website does have a "Galaxy Gray," "Emerald Green," and "Majik Blue" which all seem identical to their respective Deluxe models. I know Parker was using PPG paints around the year 2000 and onward. But could it be that around 1993-95 Parker might have been using House of Kolor instead of PPG? What other thing could explain that a Fly Deluxe Majik Blue (magic is misspelled with a "K") from 1995 coincides with the House of Kolor paint by the same name (Majik Blue, code: S2-PBC37). Do we know if Parker ever used House of Kolor during the first few years? 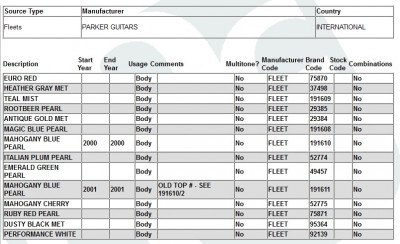 Terrific, @Alejandro! Welcome to the forum and thanks for the sugar!!