For a few years, there were two different “Parker” archtop guitar lines being sold by two different companies with "Parker" in the name: Ken Parker Archtops and Parker Guitars. It’s a little confusing, so this post, in response to a few offline inquiries I received, is intended to bring some clarity to “what’s what”.

Ken Parker left Parker Guitars in June 2004 when it was sold to U.S. Music Corp (USM), and returned to what he has regarded as his “first passion”: building archtop guitars; he did so by forming the new company Ken Parker Archtops. Ken began showcasing his archtops at NAMM and other events around 2005 under this company name. In 2006, Parker Guitars introduced the Parker Acoustic Series guitars and, in 2007, the Parker Jazz Series archtop guitars; these were the first acoustic guitar models sold by Parker Guitars [see the 2006 & 2007 catalogs for more information].

According to Ken’s website, he had no involvement in the creation or development of the Parker Acoustic Series or Jazz Series guitars. While these instruments are respectable in their own right, Ken’s archtop guitars are quite different from these instruments in a variety of ways including design, construction, electronics, materials, and, of course, timbre.

Unless you were keeping close tabs on Parker Guitars, you might not know that the acoustic guitars made by Parker Guitars were not the same as the instruments Ken was developing with Ken Parker Archtops. The Parker Guitars catalog from 2007, for example, showcased the new “Parker Jazz Series Guitars” alongside an image of Ken’s head, which probably didn’t help clarify that U.S.M. had developed their own archtop independent of Ken: 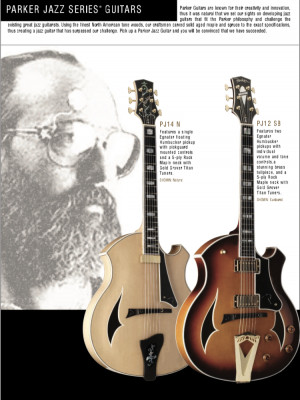 Re: A Tale of Two Archtops: Parker Guitars archtops and Ken Parker archtops


If you’ve never seen her Pikasso it’s worth a look.

Re: A Tale of Two Archtops: Parker Guitars archtops and Ken Parker archtops

Mr303 wrote: ↑Mon Feb 08, 2021 4:57 pm I’ve run into a couple sellers and owners through the years that didn’t know the difference between a Parker archtop and the Ken Parker archtop.

I suspected that much, @Mr303; I think it's understandable if you bought the archtop used and didn't really know what you have. Good analogy with the Manzer wedge, and yes: the Pikasso is definitely worth a look!
Top
Post Reply
3 posts • Page 1 of 1