Happy Birthday to my Dragonfly/Maxxfly

Discussions of the Dragonfly and the Maxxfly guitars, the Maxxfly bass, and all DF variants
Post Reply
6 posts • Page 1 of 1

Happy Birthday to my Dragonfly/Maxxfly

Here is the story.

Mrs. Notes also plays guitar, and at the time, I was playing an LTD Less Paul that I put GFS Mean 90 pickups and a varitone on. It played nicely, had a fast neck, but weighed a ton. My wife told me, "You need a better guitar." This is an advantage of marrying a musician who also plays guitar

I ordered a new at the time Dragonfly guitars from Musician's Friend. Mrs. Notes had a PM20 and the build was so nice I thought I'd try a DF sight unseen.

What arrived was a Parker MIDI Mojo guitar which cost 4 times as much as my DF. I immediately called Musician's Friend and told them of their error. They told me that they didn't have any DF guitars, and I could keep the guitar they sent me at no increase in charge.

I checked with the FTC and waited the time frame (I think it was one month) where it was legally mine, even if they changed their mind and wanted it back.

Guitar is my 7th instrument. My main instrument is sax and wind synth, followed by flute, drums, bass, keyboards and guitar. The Mojo was much more guitar that I would ever need, and I didn't like the upper horn, so I decided to put it up for sale.

I listed it on eBay as used, but in brand-new condition, and explained how I came to own it. It sold in a week for over $3000.

With the money I got from the MOJO, I paid for what I spent on the MOJU at Musician's Friend, and I bought the DF I wanted from Funky Munky music. When the dust settled, I ended up with a free DF and over $800 in my pocket. Best deal I ever made.

After the warranty was over, the neck fell in the direction of the 1st string. It was tilted down, and the fingerboard and thin piece of wood under it was hitting the neck pickup. I sent pictures to US Music, asking them how I could fix it. They said send the guitar back, even though it was no longer under warranty, they would fix it and pay shipping both ways.

They couldn't fix it right, so they sent me a brand-new guitar, saying the wood of the body was defective. Excellent customer service.

What I know from my own company at nortonmusic.com selling aftermarket styles and fake e-disks for Band-in-a-Box is that a problem is an opportunity to either lose a customer for life, or gain a customer for life, depending on how the problem is handled and solved. If one of my customers has a problem, and I can't fix it instantly, I try to make they glad they had the problem by leaving them with more than they bought in the first place.

Parker gained a customer for life (too bad they didn't last).

I liked the DF very much, but after a few years of playing P90 pickups, everything else still sounded dull. I missed that clean ping and the response to my picking that the P90s gave me. Since I got such great service from Parker, I decided to have them build a DF with two Duncan P-Rail pickups with triple-shot switching pickup rings. That gives me P90, Rail, Series Humbucker and Parallel Humbucker sounds, as well as the Piezo. They named it 522NN (NN for Notes Norton). I call it my signature model

I can pretend I'm famous

Since I got the 522 I've had minimal problems. I replaced the mag/piezo switch and a hunk of plastic where the whammy bar goes into the guitar broke off. Some 6000 brand glue fixed that.

Since one-nighters are notoriously hard on gear, I don't suspect that was out of the ordinary.

So happy birthday to my Parkers.

And I'm happy I found you all, just in case I have a problem in the future, I know where to get expert advice.

Another lovely trip to the old forum and back. Always coveted your DF, Notes.
Top

Fantastic story, Notes!! Congrats to you and happy birthday to your DF!

I regularly return to the DF and remember the pictures of you guys with your all-wood parkers.
I find it inspiring to see them out in the wild!

Here are the birthday gals in the wild. 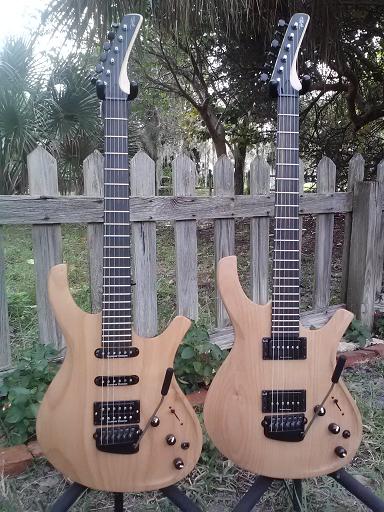