Parts, mods, projects, and requests/concepts based on adaptations of Fly parts
Post Reply
11 posts • Page 1 of 1

So let's see if the text file I used lets me paste this in from the old forum...

is out of business.

I'll have to do a bit more work. I think I can upload directly here, though.

Very cool!! Looking forward to this; I think I remember the old thread you’re referring to, and the old images!!

Yes, you can absolutely upload images directly to this forum! Nobody wants any of that “Photobucket requires a Premium Account” nonsense!!

Very much looking forward to this.
Top

Here is 4th Fly I had modified, all really unnecessary, but trying to find a more elegant way than the GK3 mounted near the adjustment wheel that I had used for years.

This had seen a lot of wear & tear and a pal of Dayn’s was willing to unload it cheap enough that I could get the parts and do just the 13-pin jack & internal GK3 I had planned on doing on my trusty '96 Black Deluxe. He sold the fly for something like $750 it's a great fly. It doesn’t play as nicely as the Black ’96 Deluxe-- slightly thinner neck and balances different.

Its a (relatively) simple mod with some simple simple instructions:
Do a reverse GK install; all Fly controls should function as stock and the output from the master volume knob will be what goes down pin 9 of the 13-pin to mix with the GK output. 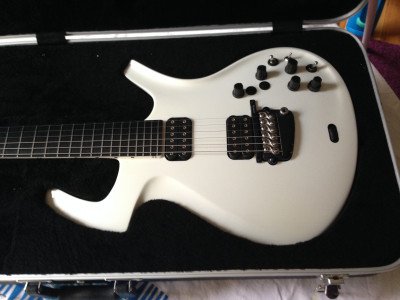 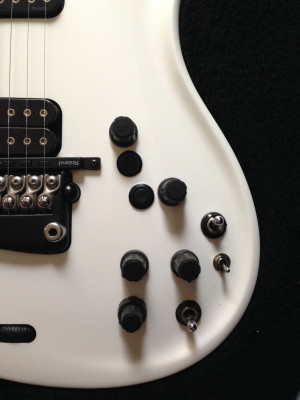 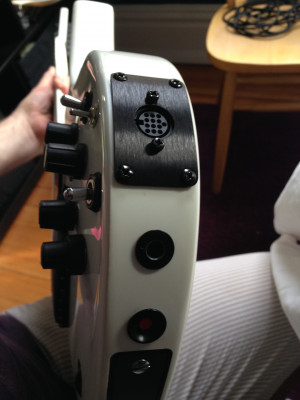 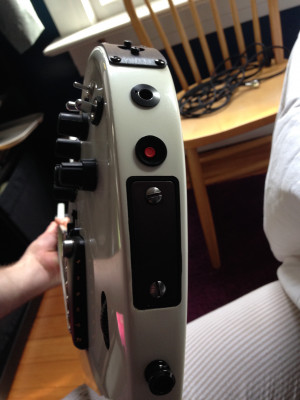 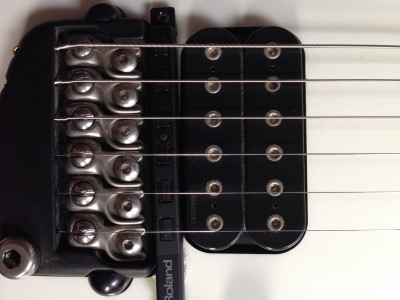 Essentially, just added S1 & S2 and a volume knob for Synth, as well as the Synth / Mags / Both switch. 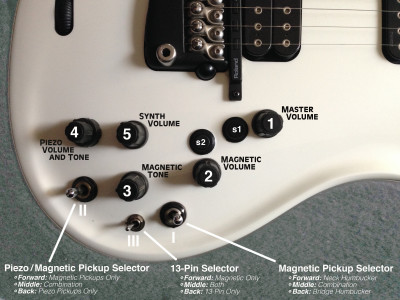 I found some Fly examples on the internets: 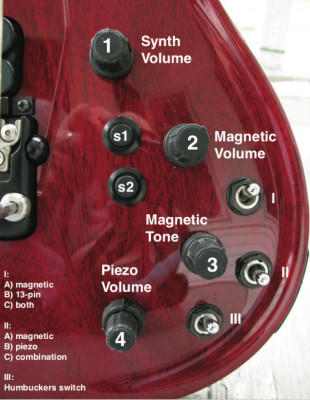 and this one was the basic go-to.

What I WASN'T able to do was get a same-sized switch for the Synth / Mags / Both switch, and I'd really like to do that for a future install.
Anyone know what part that would be?

Here's a final look at how close the GK3 has to be to the strings: 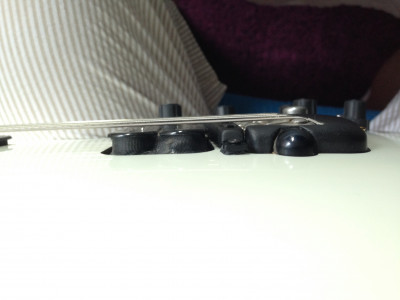 
What I WASN'T able to do was get a same-sized switch for the Synth / Mags / Both switch, and I'd really like to do that for a future install.
Anyone know what part that would be? 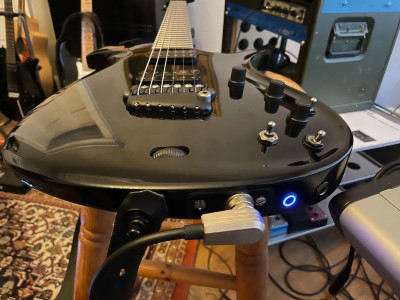 is a Mod with Hexpander and 14pin connector...
all C&K toggles... same as Parker was using...

any chance for a insight pic of the wiring?
many thx for sharing here...
M.
life is what you make it...
You should have no difficulty looking at stains on the walls or the ashes of a fire or the clouds or mud, and if you look closely at these things you will find wonderful new ideas, because the mind is stimulated by insignificant things to new inventions.
Top 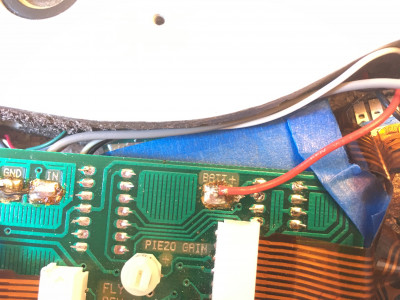 Posting with my phone so let’s see what happens. 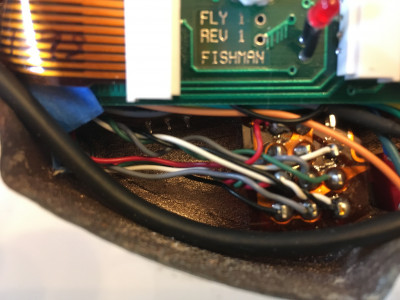 The Roland board is behind the fishman board. 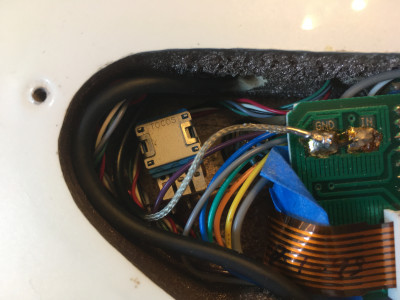 And everything is very solid and tight. 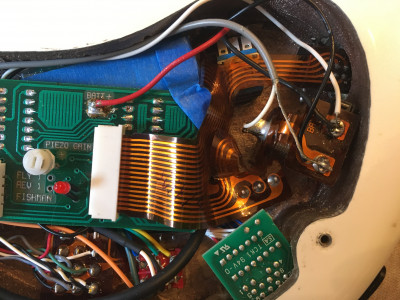 I wouldn’t want to have to take it all out... 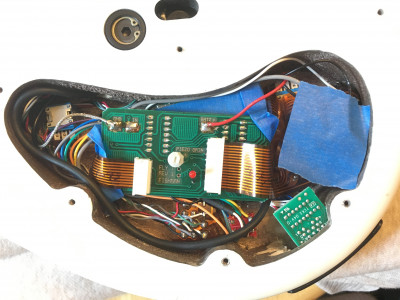 hello,
many thx for posting!
wow looks superb' done...
yep and very solid...
M.
life is what you make it...
You should have no difficulty looking at stains on the walls or the ashes of a fire or the clouds or mud, and if you look closely at these things you will find wonderful new ideas, because the mind is stimulated by insignificant things to new inventions.
Top

Ready for another?
This is adapted from the old forum, so a lot of this is copied from an ancient text file. I'll try to update it. The pics are from 2016.
(I’m telling you, I am crazy. Or stupid.)


Here is #1, the 1st Fly I ever owned and the first fly I had modded. This had seen over a hundred gigs and most of them with the GK3 wart strapped on, playing alternate tunings Done with a Roland VG8 and working with a singer playing Joni Mitchell songs. The strap peg stripped so I had to move that and there were a few light dings but the fretboard was the best thing I had ever felt. It still is. This played better than the 97 & 98 classics I had so I sold them, but after this I tried out a Carvin Holdsworth Synth guitar and really, really wanted to just have a 13-pin jack on the guitar instead of the GK3. I had planned on doing the GK3 internal install, but this GraphTech install from Dayn is where I ended up instead…

and Here are again too many pictures. 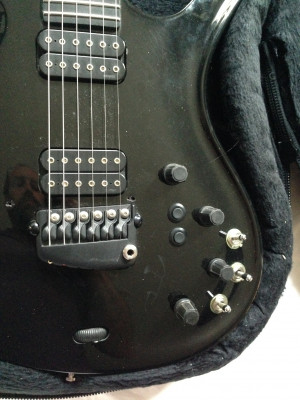 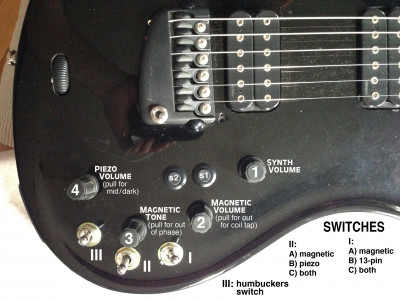 The Piezo & Magnetic tone are both push-pull pots.
Piezo has the mid/dark switch and I mostly play with it pulled out.
Pulling the Mag Tone puts the humbuckers out-of-phase. 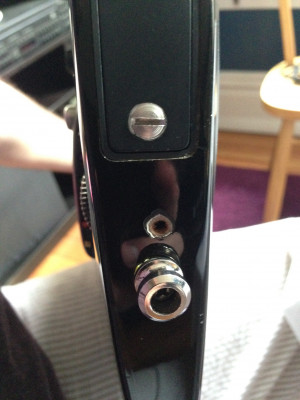 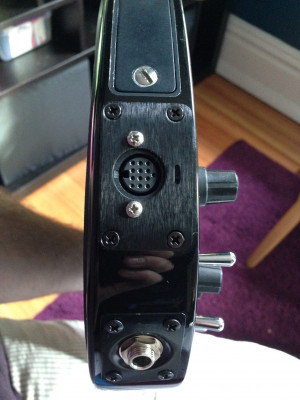 (battery stayed in the same place!)
the GraphTech Smart Jack protrudes a bit too much, but I never fixed that. 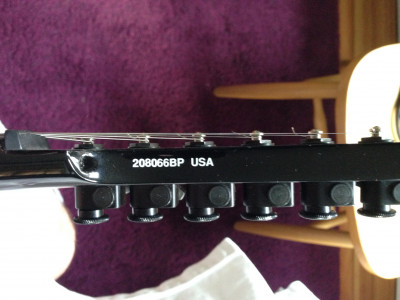 (I have never ever had to adjust that trus rod!)

So...
This was going to be a GK3-kit install, but I had the Graph Tech saddles, so I figured lets see what that system is like. I love those Roland S1/S2 buttons, so we kept those, and Dayn found some slightly longer switches that matched the old Parker switches. I really like those, but I want to find some little rubber washers to cover up that little piece of metal on them.

The whole thing was rewired point to point, and now uses all the Graph Tech components, and I kept the original Gen1 dimarzios. The Humbuckers switch is confusing as hell. You can get Bridge, Neck & Bridge or neck. Then you can pull the vol knob to make everything single coil, and you can even pull the tone knob to set the humbuckers out-of-phase. None of the combinations sound that different unless you process the signal a LOT, so clearly (to me, anyway) the Gen1 pickups don’t compliment the Graph Tech circuitry all that well. (Remember that the Gen 1s were the lowest output) I’ll probably make some kind of change to this someday.
I mostly play through the 13-pin out, and mostly i’m just using the mags to enhance some of the patches.


I just put these up here in case you are also crazy or have any better ideas than me!
just plain lost
Top

More for anyone who wonders about 1996 classic fret size. 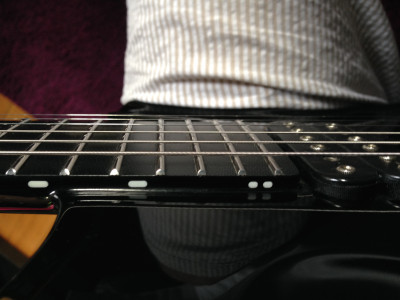 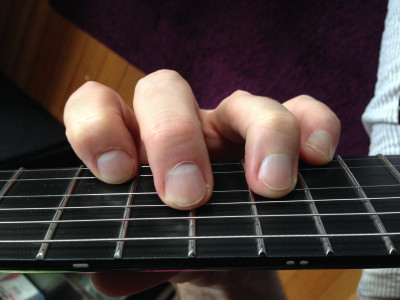 The trickiest part is learning to get chord voices like these to track without ghost notes. There is a LOT of tweaking in the settings of your 13-pin unit of choice to adjust for your play style and a lot of re-learning to get your technique to be precise.

After playing like this for a while it is really nice to just plug in through the 1/4” Magnetics and relax and play sloppy.

I had a chance to do this last week and revisited the Gen1 pickups / Graph Tech circuitry experiment and I was very satisfied.
I hadn't really gotten to explore at the volume I played last week and the overdrive options, adjusting the humbuckers using all the combinations while working with natural "EVH" distortion, no pedals just straight into my Roland JC 120 and as dirty as I could make it.